Neurogenic genital pain is relatively rare and may affect between 0,001-1% of the population, and up to 4% of patients with prediagnosed chronic pelvic pain (Spinosa 2006). However, its true occurrence rate may be underestimated due to diagnostic difficulties. Most of these patients are sent to urology or gynecology consults, but obvious pathology is undetected. This will often warrant an electrodiagnostic study, but because these are notoriously unreliable in entrapment neuropathies (Rousseff 2004, Larsen & Chieng 2019), the results will either be negative or equivocal, confusing the patient and physician, both. The gold-standard diagnostic rule persists to be a diagnostic nerve block of the pudendal nerve, but because the nerve can be easily missed if the injection is done without ultrasound guidance, this is yet another pitfall for missed diagnosis.

The cause of neurogenic genital pain is considered elusive, and the pathology idiopathic. Obvious causes such as iatrogenic damage (eg. surgical transection or partial neurotmesis), tumors or similar problems causing mechanical compression or derangement of the nervous networks must be excluded first. Systemic causes of neuropathies, such as MS, diabetes or hypovitaminosis should also be excluded, but are still not common causes of focal genital pain. As stated, however, most of these incidences are deemed idiopathic. Many believe that genito-local irritation of the pudendal nerves is what is causing the issues, and many undergo very painful intravaginal massage or similar horrible treatments with minimal improvements. Some also perform local entrapment-liberation of the pudendal nerves in the pelvic floor area itself, but the success rates are not staggering.

In reality, neurogenic genital pain is just a component, a symptom, of a larger underlying problem. Most if not all of these patients have widespread symptoms of neuropathy, consistent with lumbosacral plexus affection (Larsen & Chieng 2019). Concomitant pain along the cluneal, genitofemoral, lateral femoral cutaneous or saphenous nerves is very common. Pressure tests applied to these nerves will elicit abnormal amounts of pain. 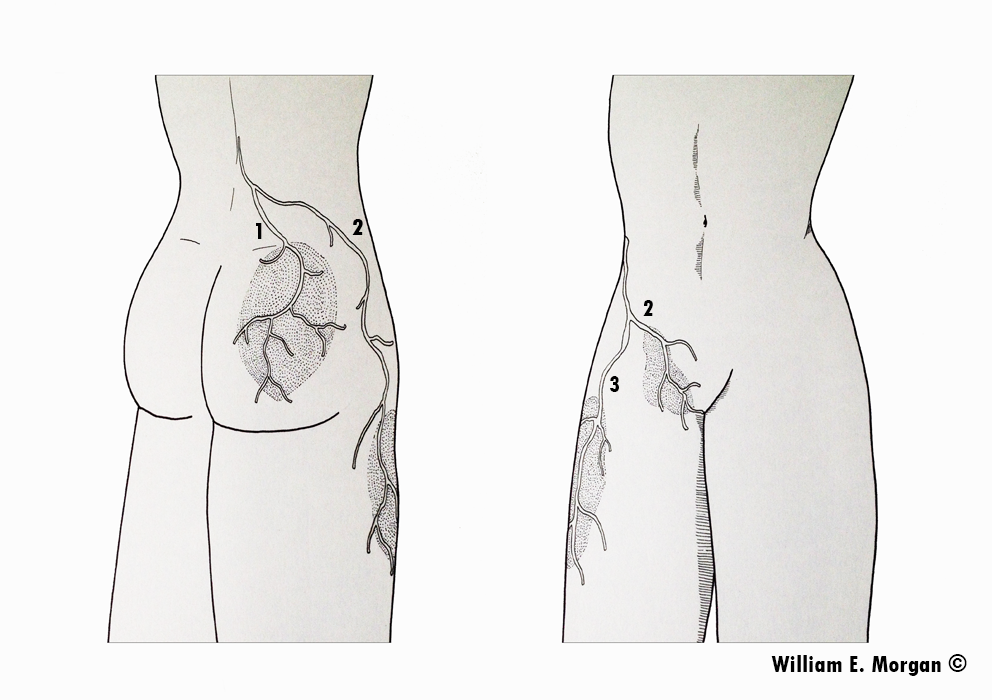 There are two main sources of genital pain, and which one it is, depends on the triggers that the patient has as well as whether or not it is centered or unilateral (it can also be bilateral). Pudendal neuralgia generally worsens when sitting and when loading the posterior hip muscles. It is not actually a genital problem, but it manifests distally (ie. where the nerve ends up). The pudendal nerve forms from the S2-4 nerve roots and emerges beneath the piriformis muscle, before it ventures into the Alcock’s canal between the obturator internus muscle and the falciform ligament. It is, in essence, a piriformis syndrome manifesting in your genitals. There are two pudendal nerves, each innervating the left and right hemispheres of the pelvic floor, rectum, perineum and vagina (or penis). Severe weakness of the deep hip rotators, including the piriformis and obturator muscles result in hyperfibrosis and thus loss of neural gliding in their fascial passages, which is the cause of the entrapment. This is curable in most circumstances with appropriate strengthening rehabilitation of these muscles. 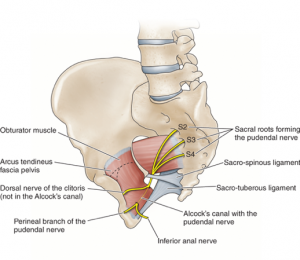 The other cause of neurogenic genital pain is inferior hypogastric entrapment plexopathy. The inferior hypogastric plexus is a part of the sympathetic nervous system and innervates your organs. It tends to cause a burning, electrical, cramp-like feeling in the anus, perineum and root of the penis or vaginal opening, or hypogastric type («menstrual») pains. The pain will be experienced as «central» in the pelvic floor, and tends to worsen with stretching of the psoas major, eg., when standing up from having being seated, walking, or running, especially uphill. The hypogastric plexus anastomoses with the somatic root ganglia of the lumbosacral plexuses. The piriformis muscle affects the sacral plexus (as it irritates the proximal sciatic/distal plexus), whereas the lumbar plexus is affected by the psoas major muscle as it literally pierces the psoas major as it emerges. This can co-affect the parallel sympathetic chain and thus also the hypogastric plexus, causing dysautonomia and sympathalgia. The lumbar plexus directly connects to the sacral plexus through its lumbosacral trunk, and this may also predispose («sensitize») due to the the double-crush phenomenon (Larsen & Chieng 2019). Again, as shown above for the sacral plexus, weakness of the psoas major results in restricted neural gliding through the myofascial of the psoas major muscle and consequent entrapment neuropathy. Gentle strengthening is the key strategy for amelioration.

Anterior labial or testicular pain is usually caused by ilioinguinal or genitofemoral nerve entrapment. This, either due to entrapment of the very same nerves within the psoas major muscle or due to positional compression between the pectineus muscle and the inguinal ligament. This is caused by tight groin muscles and sitting too much leaning forward, excessive squat depth, etc. Posterior testicular pain is a symptom of pudendal neuralgia. 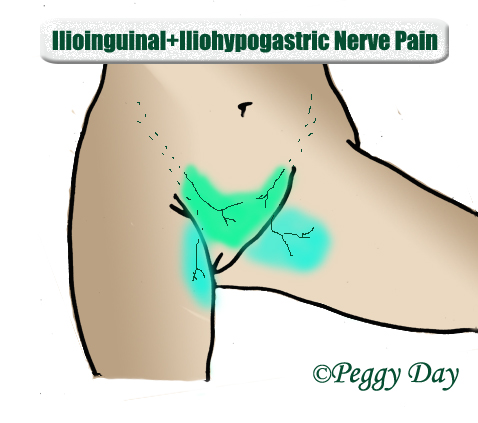 Stress, anxiety. Unfortunately, the vast majority of patients suffering from entrapment induced genital pain also suffer from stress and anxiety. This does not mean that their pain is not real, or that they are imaging the pain. It does, however, mean, that the muscular issues that are responsible for the entrapment neuropathies are grossly worsened, if not caused, by the patient’s stress levels. Reducing «tenseness» is a vital component in treating this problem and it must not be neglected. See the «muscle clencher» article on my website: mskneurology.com/chronic-muscle-clencher-woe-to-you. Do not underestimate the relationship between stress, body tension, and entrapment neuropathies.

I have also found patients who perform cycling or running sports to be especially predisposed for these problems, especially if they also suffer from anxiety disorder or high stress, PTSD, etc.

Compatible symptomatology and exclusion of other causes are always the first important considerations. Gyn/urological examinations will be unremarkable or without detection of compatible pathology. MRI will not reveal masses or similar lesion of the lumbosacral plexuses, and serological workups for neuropathies will be normal. The patient will have mechanical triggers for their symptoms, such as sitting down over periods of time, standing up or walking, especially uphill or on stairs, and will have symptoms that fit with the neuroanatomy.

Most of these patients have concurrent hip impingement (as it is caused by weakness of the hip stabilizers and bracing of the external muscles). They may have hip-intracapsular effusions seen on MRI, and often labral tears. This is not the cause of the symptoms, just a passive sign of an underlying problem. If you’re lucky, inflammation of the piriformis or psoas tendons may be visible on the MRI, but this is not the norm. Hypointensity of the distal piriformis attachment is common, especially on PD FATSAT, but usually not reported as pathology.

Patients with pudendal neuralgia may have uni- or bilateral symptoms, usually worse on one side. They get worse when sitting, especially on hard surfaces. Sitting leaning forward (greater degree of hip flexion) makes it even worse, as this stretches the piriformis and obturator muscles. The pain may be localized in the penis or vagina, perineum, or rectum and medial buttock, on that side. There may also be numbness of the glans (head of the penis) or clitoris. Pain during intercourse is common, especially for women. Difficulty reaching orgasm may occur as well. In extreme circumstances, there may be weakness of the anal sphincter, but this is not the normal. Electrodiagnostic tests are almost always normal. However, a well-placed ultrasound-guided nerve block will generally be positive, confirming the diagnosis. Strengthening the piriformis and obturator muscles, and with this developing worsening of symptoms, also confirms the diagnosis. 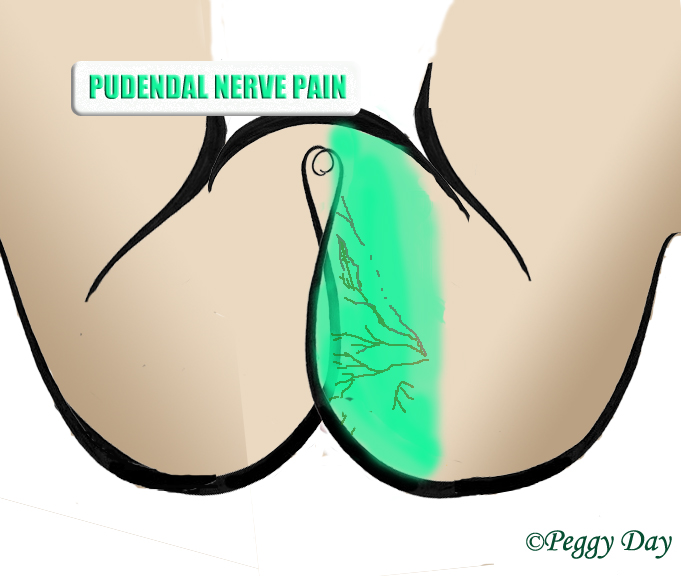 Patients with hypogastric entrapment really suffer from lumbar plexus entrapment syndrome with secondary affection of the sympathetic chain. The pain will be situated in the central pelvic floor, causing symptoms of prostatitis, vaginal, perineal or rectal pain that does not spread out to the periphery of the pelvic floor. It can affect the clitoris or glans of the penis. It tends to improve when sitting down (presuming there is no concurrent problem with the pudendal nerves, which, frankly, there often is), but immediately worsen when standing up (this stretches the lumbar plexus within the psoas major muscle). It will also worsen when walking uphill, running, or even flat-walking. A fluoroscopically guided nerve block to the inferior hypogastric plexus through the transsacral (S3 or S4 foramen) or para-coccygeal approaches may prove helpful in diagnosis, but is difficult to perform (Choi 2012). Much easier it is, to achieve worsening through strengthening of the psoas major muscle. This confirms the diagnosis. 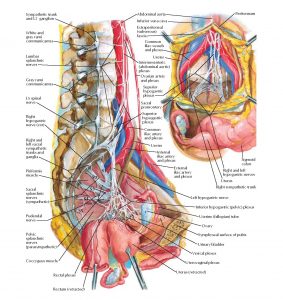 Electrodiagnostic studies (Edx) are almost always normal. A normal test does not mean that the nerves are normal; disregard this completely. As with most entrapment problems, a proper clinical workup by an experienced physician is the best way to get diagnosed. EDx is helpful, however, in the diagnosis of autoimmune causes of neuropathies. MR neurographies rarely reveal thickening of the nerves or frank plexopathy. MRI is more helpful in excluding other causes, such as tumors that are compressing the plexuses or similar.

Entrapment neuropathies do not tend to respond well to pharmacological treatment, and therefore it is helpful to initiate conservative treatment early on. Neurontin, Cymbalta, or Lyrica may help for some patients, but generally carry sideffects. More often than not, the drugs do not give significant relief of symptoms for these conditions. Opioids do not tend to be effective for neuropathic types of pain.

As already mentioned, the treatment for these conditions is very careful strengthening of the psoas major and piriformis and obturator internus muscles. This should be done twice per week, just one working set until mild fatigue. Mild worsening the subsequent day suggests correct execution, confirms the diagnosis, and also suggests that an appropriate volume of training was done. Anything more than «mild worsening» for one day, suggests too much work being done. For many of these patients, that can mean that they did 5 instead of 3 reps. The tolerance is often very poor, which also explains why they developed this problem in the first place. Treatment time can range between six months to 2 years depending on severity. Stretching weak muscles make them worse and must not be done. Thus, stretches for the deep hip rotators and hip flexors must not be done, as it makes the patient worse over time.


It is also important to avoid sitting on hard surfaces, and avoid sitting leaning forward or squatting for prolonged periods of time. Stretches for the pectineus and adductor brevis and adductor longus muscles can be helpful in increasing the capacity for forward-leaning.

The patient must evaluate themselves for stress and bracing. Having a chronic tendency to tensing up the abdomen, butt, or entire body, is common, and extremely detrimental. Work on relaxing. Gradually, it is possible to stop this pathological behavior.

Kjetil Larsen is a Researcher and a injury rehabilitation specialist, and is the owner of MSK Neurology. He specializes in the treatment of chronic pain and has developed several distinctive protocols both with regards to diagnosis and conservative rehabilitation of difficult conditions. Kjetil has also published several peer-reviewed studies on musculoskeletal and neurological topics.